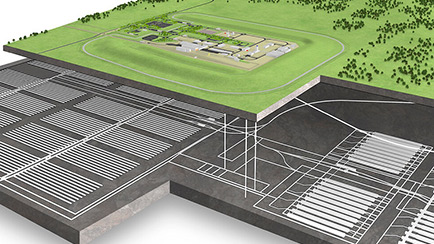 The Office for Nuclear Regulation (ONR) has published a revised position statement on the interpretation of ‘bulk quantities’ for the storage and disposal of radioactive waste.

This action was taken to facilitate the legal changes that will be needed to ensure a future Geological Disposal Facility (GDF) can be licensed by ONR.

The UK government policy (in England and Wales) is to dispose of higher activity radioactive waste through emplacement in a GDF.

This involves placing waste deep underground, typically 200m-1000m, where the geology and other engineered features act as a long-term barrier against escape of radioactivity, isolating the waste from the biosphere and the effects of climate change.

ONR has no role in identifying a site for a GDF as Radioactive Waste Management Ltd (RWM), the GDF developer, is responsible for finding a host community for a GDF through in-depth consultation and discussions with local people in those communities that have expressed an interest in hosting the facility.

However, as the independent nuclear regulator, when a site for a GDF is finally selected, we will assess the safety case and the organisational capability of RWM when considering its licence application, and then regulate its construction and operation, to ensure it meets the high standards of safety and security required by UK law.

There are discussions now taking place on potential GDF locations with the communities of Allerdale and Copeland in Cumbria, and also in Lincolnshire.

ONR, jointly with the Environment Agency, has engaged with the local working groups to explain our role.

Our review and public consultation have led to an updated position statement on ‘bulk quantities’ which includes criteria intended to set a threshold for disposal of quantities of radioactive matter at or above 1 million times the Radiation (Emergency Preparedness and Public Information) Regulations 2001 (REPPIR) level.

Dr Tim Marshall, who led ONR’s review said: “In providing clarity around the term ‘bulk quantities’ we aim to ensure a targeted, proportionate, consistent, and transparent approach to regulating the management of radioactive matter.

“While licensing a GDF is still some way off, we chose to do this now to provide clarity and certainty to communities engaged in the process regarding our future regulatory role.

“Our revised interpretation will also allow us to focus on applying the licensing regime to those hazards that require it, without imposing inappropriate or disproportionate obligations on industry when there is already adequate regulatory scrutiny in place.

“The responses to the consultation have helped to shape our updated position statement on the interpretation of ‘bulk quantities’ and will inform development of additional guidance to support future licensing decisions.

“I would like to thank all those who took the time to share their comments and feedback with us as part of the public consultation exercise.”

Along with the Environment Agency, we have also recently published our 2020/21 annual scrutiny report on Radioactive Waste Management’s work to deliver a GDF.