The Office for Nuclear Regulation (ONR) joined representatives from across the world for a multinational meeting about managing spent fuel and radioactive waste.

The ONR team worked closely with colleagues from the Environment Agency and the Department for Business, Energy & Industrial Strategy (BEIS), at the two-week event in Austria. 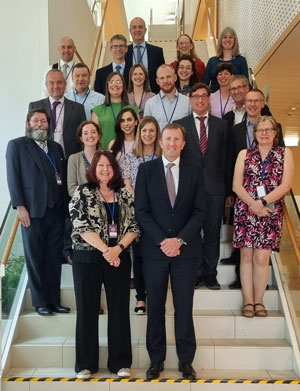 In the presentation they highlighted the notable areas of progress over the reporting period; updated on work being done to address challenges and overarching issues identified at the previous review meeting; and gave an overview of the UK nuclear industry’s response to the COVID-19 pandemic and its impact.

The joint convention is an ‘incentive’ convention which promotes a high level of safety for the management of spent fuel and radioactive waste through a peer review process every three years.

During the meeting, the UK delegation joined a number of their international counterparts in condemning the Russian invasion of Ukraine and its nuclear safety implications.

A strong statement was delivered to the President of the joint convention by the UK Mission to the United Nations in Vienna.

Paul Dicks, ONR’s Director of Regulation – Sellafield, Decommissioning Fuel and Waste, who was in Vienna, said: “I was delighted to be part of the ONR team supporting the UK delegation this year.

“As the only legally binding international instrument to globally address the safety of spent fuel and radioactive waste, the joint convention has a vital role to play.

“As a contracting party to the convention, the UK is committed to demonstrating and applying stringent safety measures to the management of spent fuel.

“The peer review process is also extremely beneficial and ensures there are mechanisms in place for expertise to be shared between different countries, and for continuous learning and improvement.

“From a UK perspective, going through the peer review process also helps to provide assurance to the public and other stakeholders that we are meeting our obligations under the convention, and that our national arrangements conform to international standards.”

The joint convention was adopted in 1997 and applies to spent fuel resulting from the operation of civilian nuclear reactors and to radioactive waste resulting from civilian applications.

It also applies to spent fuel and radioactive waste from military or defence programmes if these materials are transferred permanently to, and managed within, exclusively civilian programmes.

And it applies when materials are declared as spent fuel or radioactive waste for the purpose of the joint convention by the contracting party concerned.

In addition, it covers planned and controlled releases into the environment of liquid or gaseous radioactive materials from regulated nuclear facilities.

Find out more about the joint convention.